In Search of Roman’s ‘lost boys’ of World War I 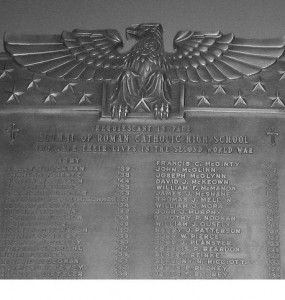 “I resolved to find what remained of Company D for (my grandfather), and for (his fellow soldiers), and for myself, as well, and complete a story begun on a hot July day so long ago, when young men raced across open fields toward machine guns and disappeared into history.” (From “The Remains of Company D – A Story of the Great War” by James Carl Nelson)

As I recently walked down the first floor hallway of my old high school located at Broad and Vine streets, my footsteps sharply echoed off the walls, a stark reminder that it was late afternoon and that I was alone in the normally bustling, but now deserted, corridors. Prior to that day, I had been poring over old yearbook photos, and I immediately noticed that the interior, with its beautiful early 20th century architecture, looked strikingly similar to the way it had looked in 1917. Sunbeams escaped through open classroom doors and their ribbons of light streamed across the hallway. Dust motes hung motionless within their illumination, but then suddenly swirled into motion. Just an errant draft, I thought to myself, or perhaps the spirits of the boys who I had been searching for still walk these halls.

I stopped at the end of the hall and looked up at the plaques hanging on the wall which display the names of Roman Catholic High School alumni who had lost their lives in World War II, Korea, Vietnam, and the Persian Gulf wars. As I stared at the long list of names, well over a hundred of them, I knew that the names that had been eluding me would not be found among them, but I was hoping that my visit would serve as motivation for me to not give up on what had now become a very difficult task. I touched the raised metal letters of the names on the plaques and could only shake my head in frustration. “Who were the boys from World War I?” I softly whispered. I futilely hoped that the ghosts of the past would somehow miraculously answer my question, but the deserted hallway remained silent as the dust motes hung motionless in the fading strands of sunlight.

Roman Catholic High School was founded by Irish immigrant Thomas Cahill in 1890, and was the first free Catholic high school in the country. By the time the United States had entered World War I in 1917, the school was already over a quarter century old, and, as difficult as it was to believe, many alumni, myself included, simply assumed that there was no commemorative plaque for World War I because no Roman alumni had died in that war. However, as my interest and knowledge of The Great War deepened over the years, I began to doubt this assumption. After I read James Nelson’s brilliant book, The Remains of Company D, I resolved to finally learn the truth regarding World War I and the lost boys from Roman.
I began my search by talking to my father (Class of 1948) and other older alumni, hoping that they might remember a World War I commemorative plaque when they were students, but none of them could. My hopes were briefly raised when I learned that a group of students attempted to find an answer in 2008, but the project never finished.

I contacted Roman’s resident historian, Ed Keenan (Class of 1954), and we soon found ourselves behind a chain-link fence in the dusty basement of Roman’s Alumni Annex building sorting through some of the school’s voluminous records and documents. Ed and I looked over the numerous old trophies, certificates, flags, banners, and plaques that had been collected over the years, but came up empty. However, during a review of the 1919 yearbook, our first clue finally emerged. A passage in the Alumni section read: “Some fourteen of our Alumni have made the supreme sacrifice and laid down their lives on the fields of France for their country.” We now knew the number, but still no names.

But it was during a second review of the 1918 yearbook that the names of the first two alums who gave their lives were finally revealed. A short passage stated that on November 28, 1917 the Roman Alumni formally presented to the school a “sad Memorial Flag…the first of its kind in Philadelphia, (with) two gold stars on a purple background…(to) commemorate the deaths of E.J. Kelly…and W. Kimmel.”

As I read the passage, I was momentarily shaken. Purple and gold holds special meaning for Cahillites. In addition to being our school’s colors, they are also the title of our Alma Mater which opens with the line: “When day mounts the East, what flag does he hold?, He flings out his banner of Purple and Gold.” It kept repeating in my mind as I envisioned this solemn Memorial Flag and stared at the names.
Last month I presented my findings to Roman’s Board of Trustees. Their enthusiastic response was overwhelming as numerous Board members volunteered to help find the remaining 12 names. Many of us now believe that there once was a commemorative plaque, but it was probably lost during the school’s numerous renovations or possibly destroyed in a 1959 fire at the school. A new plaque to commemorate the 14 is now being designed, with a formal unveiling planned during the school’s annual Veteran’s Day ceremonies. The remaining 12 will be listed as “Unknown Cahillite” until we can find their names.

Thomas Cahill never had any children of his own so Roman alums often refer to themselves as “sons of Cahill”, and we are now more determined than ever to find our lost brothers from World War I. These boys have somehow disappeared into history, but we will find them, and they’ll soon take their rightful place of honor on the wall of the legendary school at Broad and Vine.

Chris Gibbons is a Philadelphia writer. He can reached at gibbonscg@aol.com