One New York Times reporter summed up O’Neill’s ambitions and resulting failures with his article “A Patriot Under a Cloud.”  In comparing O’Neill to Julius Caesar, a military leader who O’Neill undoubtedly admired, the author writes

Caesar was the General of an actual Roman Republic, O’Neill was the General of a possible Irish one; Caesar had a good many enemies in the Roman Senate, so had O’Neill in the Fenian one; Caesar “came, saw, and conquered;” O’Neill went, saw, and – was arrested. . . He joined the Fenian organization because it promised a fight, and he went to Canada because it was the only opening that offered for fighting.

John O’Neill attempted one more time to fight British rule.  William O’Donoghue approached the Fenian Brotherhood months after the 1870 raids and asked for assistance in fighting on behalf of the Red River Colony.  He received rejections from every member of the organization except John O’Neill.  O’Donoghue aspired to secure either independence for the Red River Colony or annexation to the United States.  O’Neill apparently wanted to try the Canadian borders one more time and resigned from the Fenian Brotherhood in order to do so.

The idea of seizing the Red River Colony was not new to the Brotherhood.  Frank Gallagher's correspondence from 1868 shows an exchange of information about the western territory which they had hoped would lead to a manageable military success.  John Wilkeson had written on April 19, "The region I spoke to you about, the so-called Red river settlement, lies open, and could be occupied by a force of brave men, used to arms, not over two thousand and held against the whole power of England."

The Fenians never actualized their attack on the Red River Colony but it is likely that O'Neill used strategies and resources acquired during these earlier discussions while acting on his own.  On October 5, 1871, O’Neill crossed the Manitoba border with his party.  Resulting rumors of the infamous general's return spurred 1,000 Canadian volunteers to come forward as well.  O’Donoghue and O’Neill set up at a Hudson’s Bay Company trading post in North Pembina and without any fighting but with some confusion and chaos their men all either surrendered to the Canadian forces or attempted to escape by crossing the Red River.  Despite the effort not officially having the support of the Fenian Brotherhood, many saw O’Neill’s name in conjunction with the ordeal and made false assumptions. 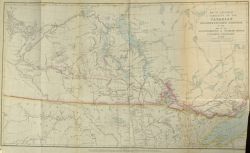 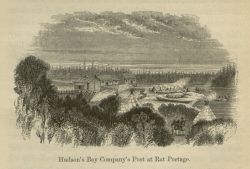 By 1871 another organization had challenged the Fenian Brotherhood’s dominant role as the resource through which Irish Americans could show their support for Ireland, physically and monetarily.  Clan na Gael benefited from the American Fenian’s history of failures and divisions.  The Manchester Irish Revolutionary Brotherhood transfered all relations from the Fenian Brotherhood to Clan na Gael, who espoused a determination to operate in a united manner for the Irish cause.  After operating under the founder, John Devoy, the Clan enacted an executive committee to head the organization.  The Clan hoped that by dividing the responsibility among several people they might avoid the ill-fated Fenian factionary problems, which typically arose from single leaders who acted for personal reasons and ignored their brothers’ input.   Unable to avoid their predecessor’s pitfall, Clan na Gael did faction before the century was out and split off into parties headed by John Devoy and Alexander Sullivan.  They did not, however, attempt to spite the other group by carrying off farfetched invasions for which they were unprepared. 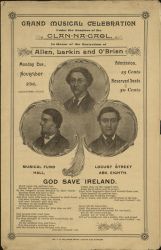 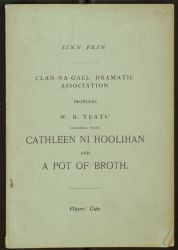 Program from “Grand Musical Celebration Under the Auspices of Clan-Na-Gael in Honor of the Martyrdom of Allen, Larkin and O’Brien,” (Clan-Na-Gael, 1891).  [Digital Library]

Clan na Gael has remained active despite the schisms, but the Fenian Brotherhood officially discontinued itself at a meeting in 1886.   With similar membership and intentions, the Clan quickly surpassed the Fenian Brotherhood in efforts to send support directly to Ireland by way of picnics and other fundraisers.  The group of Irish Americans even continued to act aggressively on their own accord instead of simply acting as a bank account for Irish use.  In 1876 they successfully rescued military prisoners held by the British in Australia through the Catalpa Rescue.  While aggressive, this plan differed from the Fenian Brotherhood’s aggressive movements because of its basis on realistic preparations and its motivations.   Clan na Gael aimed to further the Irish cause through the return of its warriors while so many Fenians aimed for military success in order to win over opposing factions.

Clan-na-Gael organized in the US with the support of the Manchester circle of the I.R.B.