FALVEY LIBRARY
Home Search Guides Help
You are exploring:  Library  >
Exhibits Home  >
Torn Between Brothers: A look at the internal division that weakened the Fenian Brotherhood  >
Men of Action

At the close of 1865 the Fenian Brotherhood had committed to gaining Ireland freedom from British rule, and had to do it with much less help from the Irish Revolutionary Brotherhood overseas, whom the British government now closely monitored.  Once freed from his rivalry with the fugitive James Stephens, however, John O’Mahony soon found opposition to his rule from within his own ranks. 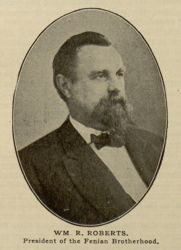 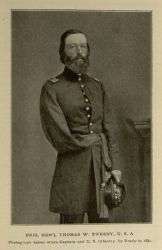 Joseph Denieffe, A Personal Narrative of the Irish Revolutionary Brotherhood: Giving a Faithful Report of the Principal Events from 1885 to 1867, Written, At the Request of Friends, Edited by Stephen J. Richardson, Predentation Ed. (New York: The Gael Pub. Co., 1906), 138.

Joseph Denieffe, A Personal Narrative of the Irish Revolutionary Brotherhood: Giving a Faithful Report of the Principal Events from 1885 to 1867, Written, At the Request of Friends, Edited by Stephen J. Richardson, Predentation Ed. (New York: The Gael Pub. Co., 1906), 267.

In the city of Philadelphia Fenians from across the country congregated for the 3rd Fenian Convention.  Now October 1865, some members of the organization felt that O’Mahony’s seven years of leadership had produced no great progress for the Irish cause.   Led by William Randall Roberts, a group of Fenians bearing the name ‘Men of Action’ called for a reform of the entire organization’s power structure.  The convention saw a senate of fifteen added to the infrastructure of the Brotherhood.  Newly elected Senate President Roberts now guided the governing body that assumed much of the authority that the Brotherhood stripped from O’Mahony’s own presidential powers.

O’Mahony disagreed with the ‘Men of Action’ on one central issue.  Roberts and his Secretary of War, Thomas Sweeny, endorsed a plan of action in which the Fenian Brotherhood did not send their supplies and soldiers to Ireland for a revolution, but rather marched themselves up to British North America and furthered the Irish cause by making trouble for Britain in Canada.  O’Mahony refused to consider any uprising not on Irish soil and his opponents reacted quickly. 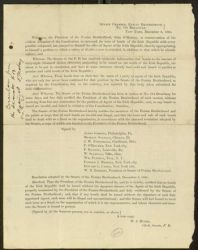 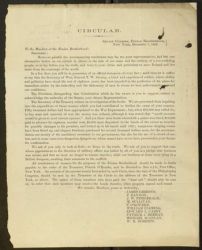 On December 7th 1865, an account of a Fenian Senate meeting circulated with more amendments to the power structure.  The publication brought attention to President O’Mahony’s unwillingness to allot funds towards General Sweeny’s military campaign and also called the President’s recent printing of bonds unconstitutional.  The members of the Fenian Senate called for supporters to send all money to a new and separate treasury and impeached President O’Mahony, whose position would soon be filled by Roberts. The senators shamed O’Mahony’s passive course in the published report:

We ask of you only to look at facts – to listen to the truth.  We ask of you to support that man whose appointment to the direction of military affairs was hailed by all of you as a pledge that business was meant, and that we were no longer to remain inactive, while our brethren at home were lying in a dungeon, awaiting their summons to the scaffold.

Both leaders, O’Mahony and Roberts, held separate conventions within a month from each other in order to assert their own authority.   In New York City O’Mahony and his supporters both reinstated the 1863 constitution that predeceded the power reorganization and discontinued the Fenian Senate.  Roberts’ convention in Pittsburgh, however, unveiled General Sweeny’s plan for Canadian invasion.

The Fenian membership was decidedly split in two.  No Roberts supporters attended O’Mahony’s convention and anyone with O’Mahony sympathies was turned away from Pittsburgh’s meeting.  This division meant that whichever side took action would do so with only half of the soldiers, arms, and financial support that Irish-Americans would be able to proffer.

Joseph Denieffe's A Personal Narrative of the Irish Revolutionary Brotherhood offers an appendix of correspondence between leaders that elaborates on the situation.  John Mitchel, an Irish nationalist active within the Irish Revolutionary Brotherhood, wrote to O’Mahony frequently and bemoaned the disastrous effect the rupture had on both countries’ efforts:

I need not tell you, dear O’M., how bitterly I have been grieved by the shameful breakup of the F. B.  Its worst effect was not the cutting off of money supplies – it was the deconsideration of our cause in America – which sentiment of the Americans was what encouraged the enemy to make the swoop upon all Irish-American citizens they could find in Ireland.

The Roberts-Sweeny faction holds a convention in Pittsburgh