FALVEY LIBRARY
Home Search Guides Help
You are exploring:  Library  >
Exhibits Home  >
Torn Between Brothers: A look at the internal division that weakened the Fenian Brotherhood  >
O'Neill vs Senate

While the failed Canadian invasions of 1866 left Fenians dissatisfied with their organization and leaders, the same invasions brought Canadians new reasons to work towards a greater unification.  Different Canadian territories had now collaborated successfully against the Fenians once and continuous rumors of Fenian movement further improved relations between these groups of people who would benefit from better communication with their neighbors.  On March 29, 1867, the British Parliament passed the British North America Act, which united the Canadian territories as one country and established a Canadian cohesive resistance against any future Fenian advancements. 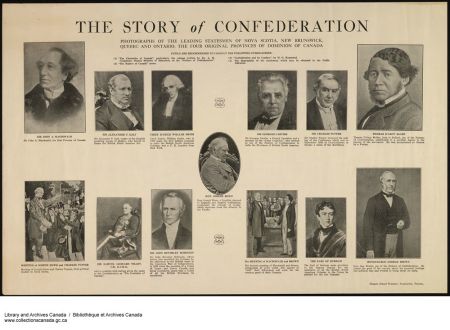 The failed invasion marred every leader except John O’Neill, who had gained a small bit of victory before ending the campaign.  O’Neill assumed the presidency on January 1, 1868 with expectations that the Fenians would allow him to continue the Canadian campaign.  He soon learned that the Fenians were not as united in their desire to invade Canada as the Canadians were in their determination to defend their new country.  At least not all Fenians supported President O’Neill’s aggressive campaign. 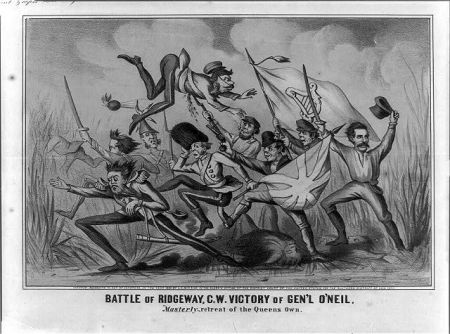 The Fenian Senate of 1866 had decided to support a leader other than President O’Mahony in hopes of military action.  The Fenian Senate during O’Neill’s presidency began to question his grand military plans and even his use of the organization’s treasury.

Amidst the conflicting plans and opinions was one Fenian Senator from Buffalo, Frank Gallagher.  His correspondence, owned by the American Catholic Historical Society and digitally housed in Villanova University’s Digital Library, shows an obvious rapport between Senator Gallagher and President O’Neill beginning as early as 1867.  In their early years of correspondence O’Neill asked for Gallagher’s assistance with acquiring arms and supplies and even planning conventions.  With hundreds of Gallagher’s papers from his tenure as a Fenian Senator, it is significant that his candid relationship with O’Neill ended in 1870.  Among his papers for the two years previous there are at least twenty letters saved from the Fenian President.  The year of 1870 brought only one letter to Senator Gallagher, and in that note O’Neill writes:

I cannot agree with your mode of calling a Congress, it would only bring a few men of the organization together and would not serve to put new life into the whole body which is absolutely necessary before taking the field.

Gallagher’s interactions and correspondence with various senators had brought to his attention the complaints and accusations against the reckless leader.  O’Neill discontinued their communication at this apparent sign of insubordination in his previously loyal Fenian brother.

O'Neill vs. the Senate

Concerns about President O’Neill’s leadership began soon after his ascendancy.  Rumors of O’Neill mishandling the contents of the treasury lasted the whole length of his presidency.  A Fenian brother providing much needed Canadian intelligence from the Toronto area wrote to Frank Gallagher during the summer of 1868 demanding an explanation for the rumors:

Considering the want of confidence in O’Neill that is prevalent here & in other parts of Canada & the difficulty a few have to encounter with the many in consequence of the same we feel entitled to a full explanation of his conduct in the matter and if there be any truth in the assertions an explanation relative to the alleged appropriate to his own use of the funds of the organization will also be very gratifying.

Mistrust did not just foster in those far away from the everyday proceedings of the Fenian Brotherhood.  Members of the Fenian Senate, who had replenished the treasury in both 1866 and 1869 with personal notes of thousands of dollars, made their accusations against President O’Neill public in April 1870.  James Gibbons, Chairman of the Executive Committee, printed the details of the treasury because O’Neill had refused to let any senators inspect the financial books.  O'Neill had also publicly slandered the Fenian Senate for questioning his enthusiasm for a prompt and expensive invasion of Canada and called his own convention to be held in New York instead of endorsing the previously planned Fenian Convention in Chicago just weeks away. 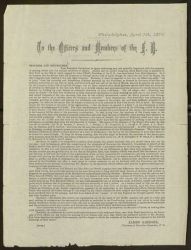 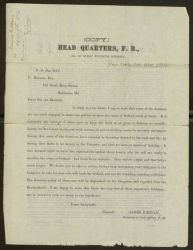 James Gibbons.  Circular: To the Officers and Member of the F. B.  April 7, 1870.  From Villanova’s Digital Library: Fenian Brotherhood Papers. [Digital Library]

In addition to questionable financial and executive decisions, the Fenian Brotherhood’s administration at the time that James Gibbons released this circular was stained with a murderous plot.  A letter from a loyal O’Neill follower to a prominent member of the Fenian Senate accompanied Gibbons’ circular.  In the letter the author, James Keenan, accuses Patrick J. Meehan and his fellow senators of abandoning the Irish cause as evidenced by their questioning the treasury’s contents.

In reply to your letter, I beg to state that some of the Senators are too much engaged in American politics to have the cause of Ireland much at heart.  It is the interest of these men to keep the fight at as great a distance as possible.   Lately we have been trying, and with success, to get everything ready for an early movement.  Seeing this, some of the Senators have resorted to throwing distrust in the rank and file, by saying that there is no money in the Treasury, and that we have no means of fighting.  It was deemed right to warn the organization against these hounds, who for self are ready to sacrifice the cause of Ireland.  Let there be no mistake.  There will be a fight, and that before much longer.  We desire you to take no action, further than instructing your delegates to the Congress to vote for men who will work for Ireland, and not for truckling, plodding politicians.  The Senators guilty of these acts will be impeached at the Congress, and expelled from the Brotherhood.  I am happy to state that there are very few of these unpatriotic Irishmen; one is, however, even too many in our legislature. 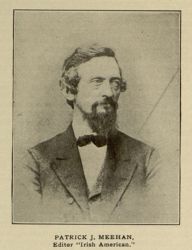 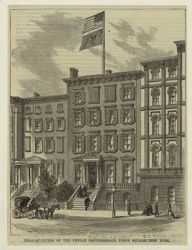 Joseph Denieffe, A Personal Narrative of the Irish Revolutionary Brotherhood: Giving a Faithful Report of the Principal Events from 1885 to 1867, Written, At the Request of Friends, Edited by Stephen J. Richardson, Predentation Ed. (New York: The Gael Pub. Co., 1906), 97.

Seven days after James Keenan told Meehan that one senator who questions the Canadian invasion was “too many in our legislature,” he shot the man outside of Fenian Headquarters in New York City after a late night Executive meeting.  Schisms and leaders laying blame on one another decorated the Fenian Brotherhood’s past  but on February 28th one Fenian attempted to kill his fellow brother.  This solidified the division between O’Neill and his senators and left both groups scrambling to accomplish their goals.  O’Neill’s goal was to invade Canada with whatever men and supplies his share of the Brotherhood had to offer without the Fenian Senate’s notice.  The Senate’s goal was to stop O’Neill from enacting a Canadian invasion without effective preparation, supplies, and surprise.  The United States’ officials might not have interfered with Fenian preparations thus far in order to secure Irish votes in post-war instability, but they knew the steps O’Neill was taking and their stance on neutrality had yet to change.

Even after the United States Government interfered with both 1866 raids O'Neill still believed that politicians would lend their support to the Fenian plots.  A letter to the Fenian membership in late 1868 demonstrated this reliance on outside provisions for preparing his army.

As you well know, our great want is money, without which, it will be impossible for us to succeed in placing an army, thoroughly prepared and provided for, in the field at an early day.  For the next three or four weeks the politicians of the country will be loud in their professions of love for Ireland, and desire to see her free.  Let, then, a committee appointed for purpose from each circle in your District, wait on those parties and on all others likely to aid us, and put them to a practical test by soliciting their personal subscriptions towards procuring the necessary means to place an army on the field. 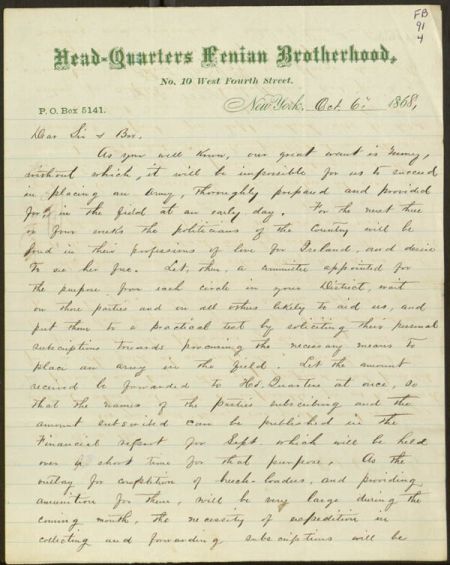 O’Neill begins to mobilize his forces