A patriotic and instructive game

“The daughter of what major general died as a nurse at Camp Meade?” 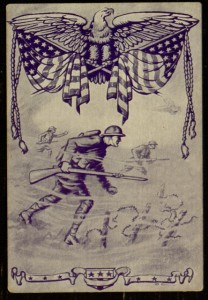 America in the War  a patriotic and instructive game with pronunciation of all war names by Alfred F. Howe
http://digital.library.villanova.edu/Item/vudl:367602

Newly digitized by Villanova University’s Digital Library, but prepared for, and distributed by, the “Committee on War Activities of the Knights of Columbus” in 1918 this trivia game was created to bolster morale on the American home front and highlight the new American contribution and sacrifice to the ongoing European war and resultant Paris Peace Conference.

“What President of the United States was the first to cross the Atlantic?” (answer: Woodrow Wilson)

Even for military historians, this “War Names” game can be a challenge! 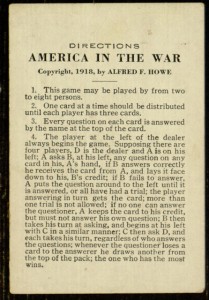 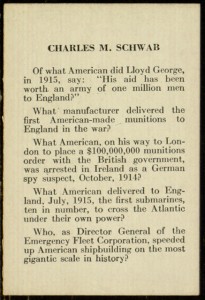 And the answer to the lead question, in case it stumped you, is: Clarence Ransom Edwards. Alas, that the name of his now-deceased daughter Bessie didn’t warrant a “War Name” entry, though she is referenced in Edward’s Wikipedia entry.